Fleas are serious business. That sounds like I’m joking, but I’m not. Do you remember that thing that was a big deal back in the day? It was called The Black Death and it killed somewhere between 75 and 200 million people. That disease is not dead. Cases of bubonic plague still pop up every single year. It’s spread by fleas.

That’s not all the havoc they cause (or the most common). They can also transmit typhus and tapeworms.

Needless to say, if you find even one flea on your pets, in your house, or on yourself, you need to get the matter resolved immediately.

There are, of course, a number of products available all over the market to kill fleas, but most of these are pesticides and can cause allergic reactions to your pets or worse. Not only that, but many of them don’t work anymore because the fleas are becoming immune to them!

It’s no wonder that so many people are now turning to natural remedies to solve this problem.

One of the best, natural ways to kill fleas is with salt. Why? Because it dries them, and their nasty little eggs out. 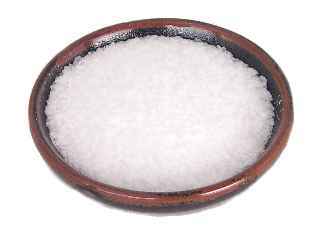 Salt is a desiccating agent, meaning that it draws all the moisture out of whatever it can get its salty little hands on.

Much like us, bugs need salt to get things done around their bodies. If you apply salt, the fleas will lose the salt in their bodies and dry out – which is actually a kind of morbid image now that we think about it. But so is the bubonic plague, so salt ahead!

But you have to apply it properly.

First. You need highly refined, finely ground salt. This is important, don’t just like… Sprinkle your table salt onto your dog and hope it’ll work.

Next, you’re actually going to want to sprinkle that finely ground salt into your carpet. This is where many fleas and their larva live, so get the salt in there. Once you’ve sprinkled salt over your carpet, make sure it gets down into the carpet. Don’t just leave it sitting on the surface. Some people use a broom for this and others use a rake. Whatever you need to do to get it down in between the fibers of your carpet.

This allows plenty of opportunity for the fleas to start rolling around in it. Because of their size, when the fleas come into contact with a salt crystal, it cuts them open. In many cases, the flea will die this way.

Larger animals such as yourself and your pets won’t have to worry about this as much because 1) a salt crystal is going to have a harder time cutting through your skin, and 2) you have an astronomically greater supply of blood to start with. Even if it did cut you, the amount of blood you’d lose means nothing. If it cut you. Which… How many times have you put salt in your mouth? Which is full of one pretty soft membrane. Did it cut you?

That’s why this method is often the preferred treatment for pet owners who don’t want to use harmful chemicals in their homes – especially since a lot of those chemicals have to be used repeatedly to maintain their efficacy. The longer your pet is subjected to these pesticides, the greater the likelihood that these toxins could build up in their system and cause more damage.